There have been numerous rumors and accusations flying around the community. Many of these rumors have found there way onto public and private Facebook pages that many of the residents follow as well as through the grapevine. These rumors include financial fraud, immoral behavior and other illegal activities occurring at City Hall. Each of these items will be addressed briefly below as well as an update on the streets improvement program.

Financial Fraud / Embezzlement – in the middle of August 2021, the Mayor and City Administrator were made aware of accusation regarding illegal financial activities and misuse of public funds. These are very serious accusations and everyone at City Hall agreed that they needed to be fully investigated. Here is a brief timeline of the events and outcomes:

The City Administrator brought in a third-party human resources expert to conduct an evaluation of the due process granted to the City Secretary as well as investigate specific claims against the City Secretary. This individual has almost 40 years of experience in the field, serving for 20 years as the HR Director for the City of Carrollton and the last 10 years as a consultant for a number of communities, such as Highland Park, Heath, and Pilot Point.

Further, the HR consultant was provided the memo prepared by the City Administrator as well as the support documentation. The consultant was also able to speak with all the city staff, including Monica, prior to completing a report and presenting it to the City Council. The report states that the issues Mr. Nibarger was aware of were handled appropriately, “following a pattern of talking, verbal warning, and written warnings.” Further, the report validates the specific claims that were made against the City Secretary.

On October 1, 2021, the City Council received the final report from the HR consultant and considered and acted on “a resolution…removing Monica Rodriguez from her position as its City Secretary for incompetence, misconduct, and malfeasance while in office” which was passed by a majority vote. Julie Burger and Steve Misner voted in opposition, while Cindy Poe, John Taylor, and Scott Johnson voted in favor of her removal.

Streets Improvement Update – the drainage work has been completed for the entirely of the Chisholm Hills neighborhood, less the primary CMP culverts under Hilltop Trail. These CMP culverts were found to be corroded and compressing and likely to fail in the near future. The contractor, engineers, and city staff considered the potential options and presented the solutions to the Council for consideration. These included the following options (each option will require a $50,000 headwall): The risk of failure with the liners are related to the already corroded CMP culverts that would not be lined in the value engineered options. If there is a failure, the $50,000 headwall cost would be wasted, having to be removed and then replaced following the emergency repair of the street, should one of the corroded CMP culverts fail. Further, if one of the culverts fails, then all transportation is blocked, including emergency services and general travel until it could be repaired.

The City Council approved $190,000 of the already budgeted contingency fund to make permanent repairs with the installation of box culverts.

Currently, they are working on the drainage issues in Montana Court. They have tentatively scheduled the milling and base stabilization to begin on November 17th. This means that asphalt will begin to installed immediately thereafter. As long as the weather continues to cooperate, we will continue to make good progress on the project.

The FY 2021-2022 Annual Budget – This year’s budget process started in May 2021, and the City Council’s top priority and direction to staff, during the budget development, was to maintain the property tax rate at the lowest possible level. Over the next several months, staff prepared, updated, and presented multiple iterations of the FY 2021/2022 annual operating budget to the City Council for discussion. Each iteration of the budget presented to the City Council was balanced by maintaining the tax rate at the previously adopted level of, $0.30 per $100 valuation. On August 16, 2021, the City Council held a public hearing for the proposed budget. The City Council took action to adopt the proposed FY 2021/2022 annual operating budget and ratify the $0.30 per $100 valuation property tax rate.

Revenue – the property tax revenues have been approximately $500,000 from 2019 to date. There is a slight increase in the revenue for the FY 2021-2022 due to increased tax base, primarily from Falcon Ridge. 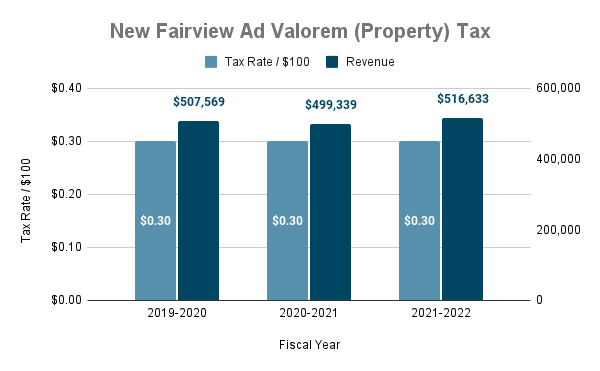 Expenditures – the staff and auditor added the additional departments to the budget to accurately reflect where the expenditures are functionally being spent. Increases in expenditures in this fiscal year are being offset primarily by newly established fees and grant revenues. 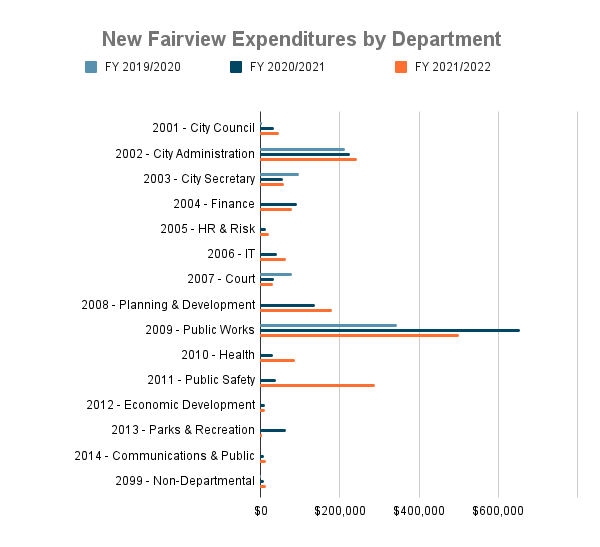