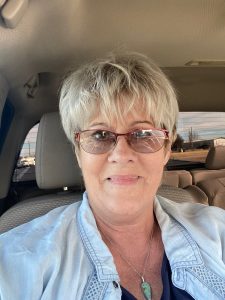 Born and raised in a small town in Louisiana, Cindy Poe relishes a rural country life.

After moving to Texas in 1989, she lived with her family in Carrolton and then the Colony before moving to New Fairview in 2014. Most of her career was spent in the mortgage industry, where she worked for sixteen years as a licensed escrow officer. Her last ten years of work were as the warehouse operations supervisor for a busy General Motors-contracted logistics company. To her, the daily two-hour, hundred-mile roundtrip commute from New Fairview was far better than living in a more-populated area with little space between houses. Since her retirement last year, her love for the community and the people who live here has only grown.

Cindy’s run for city council membership reflects her desire for levelheaded leadership in public office. At the time of her application, the council was experiencing turmoil which she did not feel matched the needs of the community. She respects the decisions that are being made now and would only continue to support the best interests of the community in her membership. Chief among her concerns is funding the fire department and local first responders, to provide more reliable service to the citizens of New Fairview. She is also concerned with the quality of the roads, and ensuring that the growth coming to the city will reflect the best interests of the citizens.

Cindy is married and between her and her husband, has five children, ten grandchildren, and four great-grandchildren, all of whom live in Texas. She loves to spend time with her family and work on home projects, and she especially enjoys woodburning.