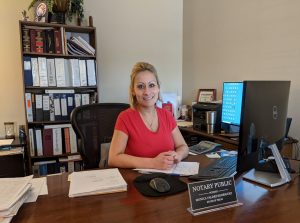 * The creation of content for the City of New Fairview website and social media pages is a collaborative effort between city administration and a local contractor. While all efforts are made to ensure the accuracy of the information presented, all parties regret that in the case of this article, final editing did not catch the error in the level of formal education Ms. Rodriguez has obtained: Monica has a Diploma in Computerized Office Specialist from the International School of Business in Denton, not a Bachelor’s degree. We apologize for this oversight and assure readers of our ongoing commitment to transparency and accuracy in all public information presented by official city sources.
City Hall Employee Spotlight – Monica Rodriguez, City Secretary
Those familiar with the offices of New Fairview know the name of Monica Rodriguez. Employed since 2002, Monica serves as the City Secretary and is the longest-serving employee of the City. Due to her longevity and the many hats, she has worn in her role, she is arguably also the most knowledgeable.
Under Texas law, the office of the City Secretary is a statutory position—meaning, it is required. The Secretary serves the administrative functions of the city, including working with the mayor, the city council, the city administrator, and every administrative department. Among other responsibilities, the Secretary manages city records, public information, and all central city services, issues licenses and permits, and administers elections and finance.
Monica’s path to employment in New Fairview was not exactly linear. “I went to school at Northwest and worked at the boot store through high school,” she explains. “When I finished I wanted to go to [college], so I told them I’d have to leave, but they worked around my schedule and I ended up working there till I finished my degree.” * Monica graduated from the International School of Business in Denton with a 3.5 GPA, after making the Dean’s List six times. Thereafter, she was hired by American General Finance in Arlington.
Although she enjoyed that position, the commute from her home in Rhome/Haslet was time consuming, and Monica was a single mother. A friend told her about an opening in the City of New Fairview for an assistant to the then-Secretary, Pat Hyden. Monica says she felt that she was the youngest and the least qualified of the applicants, but she was hired for the role. When Ms. Hyden left her position three months later for medical reasons, Monica was promoted. She has now been serving the city for almost twenty years—she was the only employee for a significant portion of the time. Her children grew up in the city office with her, as she would of necessity often bring them to work during the day, or when she was working late at night.
When asked what she enjoys most about her role, Monica is quick to talk about the many people she works and has worked with. “It’s the relationships,” she says. “The community members, the council members, and the contractors I get to know.” Over the years, she has also developed strong relationships with the secretaries of other cities in the area. At first, she says, she called on them for help learning her job. Now, it is she who helps others.
Over her almost-two decade career, Monica has attended close to twenty professional development and certification courses. She continues her self-development in her career through her active enrollment in the Texas Municipal Clerks Association Certification Program at the University of North Texas. Although this certification is not required by state law, it is something Monica feels motivated to earn. “The city didn’t have the money or time for me to take [the classes] before,” she explains. “Now it’s something I’m really happy I get to do to better myself.”
Monica Rodriguez was raised in the Rhome/Haslet area, where she still lives today with her fiancé, daughter (18) and son (9).