City Facilities will be CLOSED Monday, July 4th, in Observance of Independence Day.
Being a small city, New Fairview has many of the quaint luxuries of country living. In addition to other benefits, residents enjoy quiet communities and a relatively low rate of crime. These advantages to local life are thanks in part to the law enforcement officers who patrol the area. Sargent Alisa Scheps, Sargent Nathan Graves, and Deputy Michael Derrick are all employees of the Wise County Sheriff’s Office (WCSO) who additionally serve as resident deputies for the City of New Fairview.
Small cities nationwide struggle with the cost of funding local police services, leading many to partner with local law enforcement agencies to create resident deputy programs. New Fairview has been using this program for over a decade. Although the New Fairview region is part of the patrol area of the Wise County Sheriff’s Office, the sheer size of the county in relation to the number of staff often inhibits consistent police presence. The resident deputy program combats that weakness by placing officers in and around the city when. Currently, we have officers, in their off-duty time, stationed in New Fairview for around 40 hours each week.
Sargent Alisa Scheps, a Wise County Sheriff’s Deputy who has participated in the program in New Fairview for the past eight years, describes a resident deputies’ duties as manifold:
“When we’re working for [New Fairview],” she said, “we stay in and around the city. We issue citations and respond to calls that may come out. We go into the businesses and talk to the workers or just to people. Our goal is to be seen, and we also do public relations for the city—ask people if they have any problems. Us just driving around and being in the area so much is a big deterrent to crime, which is the main goal.”
Sargent Scheps knows firsthand the positive effects that law enforcement presence in a community can have. Growing up in Connecticut, she describes herself as a “very bad teenager.” “I had a lot of interactions with the cops up there,” she said. Rather than arresting her (when she says they should have), Sargent Scheps recalls that her local police officers “lectured” her instead, and one day, “they finally got through.” They inspired her to turn her life around. After attending police academy training through Tarrant County College, her first job was in Rhome, where she worked for a few years before joining the WCSO nine years ago. Today, she has risen to the rank of Sargent and manages part of the investigative division of the sheriff’s office. “I absolutely love law enforcement,” she says, “every day is different.”
Sargent Nathan Graves is equally passionate about police work, and his role in the resident deputy program of New Fairview. “I really like the area,” he says. “My family is a bunch of business people, and I love growth. Being in a rapidly developing area is something I really like.”
Sargent Graves spent his early life in the White Settlement area of Fort Worth before moving with his family to Bridgeport, where he grew up. He came to law enforcement via the Police Explorer program, through the Boy Scouts of America. After completing police academy training in 2012, he was hired by the WCSO. Over the course of eight years, he has gradually worked his way up to his current position of Patrol Sargent.
When asked to describe his duties Sargent Graves reports, “There are actually a lot. I take care of shift management and scheduling, patrol fleet management, report approval, and fielding complaints against officers. I’m also a marine enforcement officer so I do a lot of lake hours in the summer.” He began working with the New Fairview resident deputy program about a year ago.
Sargent Graves and Sargent Scheps are joined in their service to the area by Deputy Michael Derrick, who has worked with New Fairview for over ten years. The City is grateful to all of them for their dedicated service. 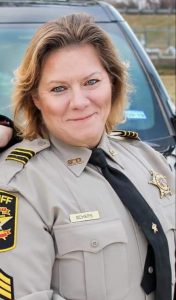 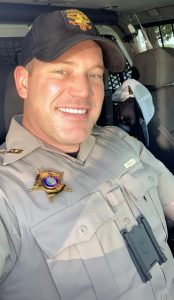 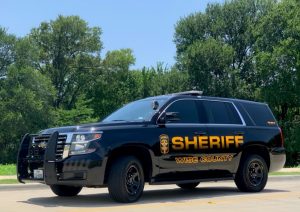